Because the carriage the mayor is learning how to drive isn’t the horseless kind.

It’s a two-seater buggy – in which he the mayor and his wife Lucille are scheduled to roll to the Victorian Inn for the March 18 centennial dinner-dance at the head of a 50 piece brass band.

The buggy is part of a collection of Arthur Trezza of Forever Farms of Randolph Township. 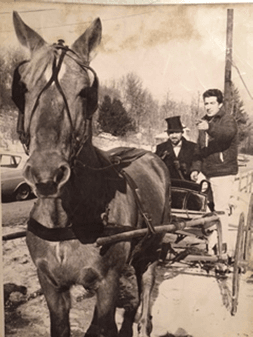 The Victorian Inn on Reserve Street was severely damaged on Monday night by fire and smoke which was fought by 250 firemen from Boonton, Boonton Township and Montville. The Inn was the former private residence of Cooper Lord, proprietor of the Boonton Iron Works and later was known as the Puddingstone Inn. The inn was to have been the scene of the Town of Boonton’s 100th Anniversary dinner and ball this Saturday night.

“No the party has not gone up in smoke” So said Chairman William J. McCready as he announced that De Maio’s Supper Club at the junction of U.S. Route 287 and State Highway No.10 in Whippany is now the scene for Boonton’s 100th Birthday Dinner-Dance Party. With dedication and resourcefulness characteristic of the fore bearers being honored in this Centennial, the “never say die” committee mobilized Monday night before the Victorian Inn fire sirens had died. Consequently, the party will still come off as scheduled at 7 PM this Saturday March 18th.

It was a many a long year since the old lady had been to a ball. Long ago, she had folded away the trailing gowns, the lace and ostrich plumes of her girlhood days.

She wouldn’t be wearing them again.

And then, for a few brief hours, Time looked the other way, while Old Boonton danced at her hundredth birthday party. More than 400 well-wishers drank her health in pink champagne at the Centennial dinner-dance.  Flashbulbs blazed as bearded Mayor Alfonse Scerbo and his wife Lucille rolled up to the door in horse and buggy.

Like faded tintypes sprung to life from the pages of a family album they danced the night away till 2:00 am.  Then at last the magic wore thin and the quests climbed into their cars  to head home or the bright glare of an all-night diner. And soon the  last candle flickered out, leaving the old lady alone with her memories.