The  bid of International Meters Inc. of New York City for parking meters  was accepted by the Mayor and Board of Alderman of Boonton. The cost of  the parking meters is $17,655 and are twin meters and will be  supplemented by single meters where necessary. The meters are 1 and 5  cent operated.

The  Sunset Lake property is being purchased by the Town of Boonton for  $25,000. The ordinance appropriates $26,560 for the purchase of the  property for public park purposes. The property, which is owned by Mr.  and Mrs. Phillip Tanga in Boonton, consists of 20 acres of land,  including Sunset Lake which covers approximately 8 acres, a field which  can be cleared for a ball park, a picnic area, bath-houses, refreshment  stand, parking area for automobiles and additional space for playground  equipment. 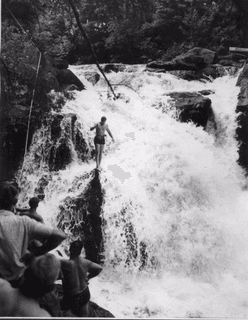 Ronald Andrew Stefanak, 17 years old of Kelly Lane, Boonton was drowned in the swirling, turbulent waters of Deep Hole, below the Grace Lord Park, Boonton at 4:40 pm on Tuesday afternoon. After approximately twenty-three hours of searching on the part of hundreds of volunteers, Ronald’s body, showing no signs of injury, was recovered at 3:56 pm Wednesday afternoon in the middle of the basin below Deep Hole by John Corigliano of Taft Street Boonton and Joseph Greene of Parsippany with the assistance of Joseph Tanga of Washington Street Boonton.

Ronald, who had graduated Boonton  High School in June, was swimming in the basin on Tuesday with Saul  Siegel of Boonton. According to Saul, Ronald dived into Deep Hole, and  coming to the surface of the water there, Ronald stretched out his hands  as if grabbing.

Thereupon, Saul swam  across the basin, climbed up the rocks and tried to reach Ronald’s hand  but could not. Ronald came to the surface three or four times, but  because of the currents and the slippery rock, Saul could not reach his  hand.

Saul rushed to Police Headquarters and reported to Sergeant John Dunn that Ronald had disappeared.

Numerous volunteers utilized all available resources to recover the youth’s body. Ex-Fire Chief Peter Wendt Jr. and Police Commissioner Edward E.  Baldwin, arrived at the scene shortly after the initial emergency call  was sounded and directly supervised the rescue work in its entirety.

An  immediate effort to rescue Ronald was made by Edwin Hopkins of  Washington Street, Boonton who unhesitatingly dived into the seething  water of Deep Hole. On Tuesday, Hopkins made four dives and on  Wednesday, seven dives. Except for Hopkins’s initial dive, he had ropes  and a safety belt about him. Robert Barnish of Pine Street, Boonton made  one dive on Wednesday.

Because of the treacherous currents, the rock formations and the lack of proper equipment to cope with the conditions, four out-of-town experienced  divers, who visited the scene Wednesday, declined to dive.

After unsuccessful attempts to locate Ronald’s body, Deep Hole was blasted three times. The dynamite charges were set off by E. J. Walter, explosive engineer of the Atlas Powder Company. Also to relieve the pressure of the water over the falls near Deep Hole, the sluiceway was closed from the former Morris Canal. Part of the water, normally flowing over the falls, was directed into the Morris Canal bed parallel to Deep Hole. The entire operations were under the direction of Acting Chief of Police Frank Kromka. A life-long resident of Boonton, he was the only child of Mr. and Mrs. Stefanak.

The filling-in of Deep Hole was authorized by the Mayor and Board of Aldermen of Boonton a last night’s meeting and an emergency appropriation not to exceed $1,500 was adopted to finance the cost. This action was in response to the recent drowning of Ronald Stefanak. At the public hearing last night’s meeting, Mr. and Mrs. Stefanak, demanded that immediate steps be taken by the Mayor and Board of Aldermen to eliminate the hazardous condition at ‘Deep Hole’ so that there might not be a recurrence of the tragedy which befell their son. “We have lost our only son”, they said. “and don’t want anyone else to go through what we have. To us, life is no longer worth living. We want something done about ‘Deep Hole’.”