Born November 4, 1929 in New York City, Hector grew up in Parsippany and attended Boonton High School. After graduation in 1949, Hector played semi-pro football in the area.

He enlisted in the Marine Corps Reserve on February 15, 1948. He was a member of the 21st Reserve Infantry Battalion at Dover, New Jersey, until he was called to active duty on September 6, 1950. 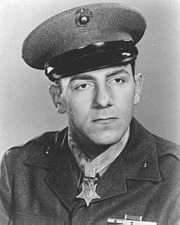 Cafferata distinguished himself during the Battle of Chosin Reservoir, single-handedly holding off a regimental-sized enemy force and "annihilating two enemy platoons" after most of his comrades had fallen.

Hector said: "For the rest of the night I was batting hand grenades away with my entrenching tool while firing my rifle at them. I must have whacked a dozen grenades that night with my tool. And you know what? I was the world’s worst baseball player.”

When a live grenade fell into the shallow entrenchment occupied by his wounded fellow Marines, he grabbed the grenade and hurled it away — saving the lives of many, but suffering severe wounds. 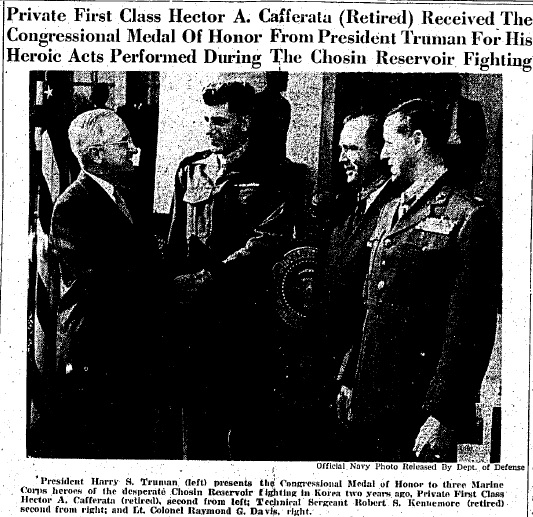 For these heroic actions, he would later be awarded the Medal of  Honor. He was evacuated to Japan in December 1950. Cafferata returned to  the United States in January for treatment at the U. S. Naval Hospital,  St. Albans, New York. He was placed on the medically retired list on  September 1, 1951.On November 24, 1952, Marine Pfc received the Medal of  Honor from President Harry S. Truman during ceremonies at the White  House.

Hector was inducted into the Boonton High School Hall of fame in 1996.