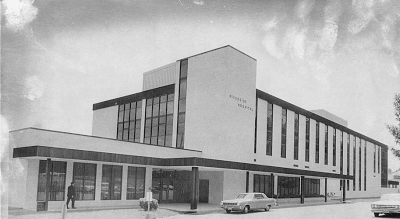 “The great day arrived to Saturday for Riverside Hospital – when all the  labor, self-sacrifice and prayer of a great many people bore fruit and  the saw the new hospital dedicated.

Halsey A, Frederick, president of the board of trustees, cut away the satin ribbon which barred entrance through the wide glass doors to the hospital,

A community hospital in the true sense of the word. Born in our locality, it has been erected by the generosity of thousands of contributions to its cause.”

The cost of the hospital was nearly one million dollars, which included all costs such as the very expensive equipment, legal and architects fees and the cost of fund raising. Relatively small in size, at the time of it opening, Riverside Hospital provided a capacity of 65 patient beds in single two-bed or three-bed rooms.

Although the hospital was official located in Boonton Township, the many local Boonton individuals were involved in the fund raising. According to the Boonton Times-Bulletin of December 12, 1950, some early board members from Boonton were Dudley Boycott and Edward Maraziti.

The official day of opening was November 2, 1955. The site in which the hospital was erected, was part of the area which was known as the “West Boonton Ball grounds” where for many years the annual Fireman’s parade ended. With the building of the hospital, 1954 was the last year the parade held its festivities at this location.

The Boonton Historical Society was first organized in April, 1959, when a founders meeting was held in the directors room of the Boonton Trust Co. A slate of officers and a board of trustees were elected to serve and the society’s attorney,

David Young III, was authorized to seek a charter from the Secretary of State in Trenton. The society was funded by memberships. 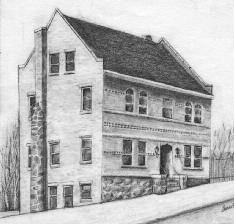 The name of the society was  chosen after long debate as that best suited to the purpose of the  society, since Boonton was geographically the hub of the area whose  history, legends, and provenance the society aimed to study and  preserve.

The Boonton Trust Co. continued  to serve as the headquarters of the society. Any items or historic  artifacts that were donated to the society were kept at the bank or in  individual members’ homes.

In 1963, the  Holmes Library offered the use of one of its rooms to the society for  permanent and temporary exhibits, as well as for storage of the many  items that the society was accumulating.

In  1980, the society moved its burgeoning collection to the second floor  of the Dr. John Taylor Building at the invitation of the American  Legion. Some of the hard working members of the society through those  years were: Pearl Clark, Ruth Wootton, Jean Lee, Arline Dempsey and  Evelyn Eckardt.

In the early 1990’s, the  building was deemed unsafe and was closed to the public. A group of  citizens formed The Committee to Save the John Taylor Building and  sought funding to renovate the building. A large portion came from a  state grant and sizeable contributions from the American Legion Post 124  and the Boonton Historical Society. More money came from individuals  who were interested in seeing this portion of history kept alive in  Boonton. The building was reopened in May 1997.

Today  the Historical Society is a vibrant member of the community offering  not only a museum with a permanent exhibit of the history of the town’s  origins, but changing exhibits throughout the year which provide a  glimpse into the day to day life of Boonton’s past.

Programs  of historical interest are offered at the Boonton Senior Center from  October through May, as well as fund raising events during the year.  Walking Tours of the town are offered during the summer months and a  well-stocked gift shop of Boonton-related books, gifts and other  treasures.

Visits to the museum by students, scouts, and other interest groups are welcomed and private visits can be made by appointment during weekdays.