The year 1891 seems to be the outstanding year in regard to fire protection. John I. Kopp assumed his duties as Mayor of Boonton in May of that year, and in his address to the Common Council at his initial meeting Mayor Kopp made the following reference to fire protection:

"One need of this town to prevent a great calamity that may come to us at any time, is to arrange for a plan to extinguish fire. In looking around I find a number of decrepit, worn-out ladders, some in pieces and all out of order, and some buckets that few know where to find. If we can do no better, the Council should see that the Town is at once furnished with new ladders put in their proper places, and buckets in order and in conspicuous places, easily found in case of need. The large cistern near the Presbyterian Church is dry, because of several leaks. This should be repaired and placed in condition to receive the water from the church roof, that it may be kept full, ready for use when required."

On July 2, 1891, a fire that destroyed the house of Mrs. Demerest had a marked effect on quite a number of our citizens.

It made them realize that it was long past the time for organizing a fire department, and, with the picture of that fire fresh in their minds., they decided to do something about it. Word was passed around that a meeting was to be held in Hopkin's Hall, Tuesday evening, July 7, 1891. This was only five days from the date of the fire.

Taken from “The Weekly Boonton Bulletin” Council meeting of July 10, 1891:

Adjourned meeting of the Council, President Dawson in the chair.

In the absence of the Clerk, Mr. Hessey was appointed Clerk. 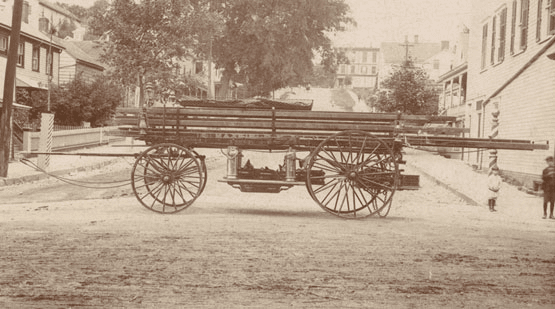 The old town of Boonton sat at the present day the Jersey City reservoir.  It appears, according various accounts, around 1820’s seems to be the  transition point of Old Boonton to the present Boonton where it is  located today. The land at this spot was then purchased  by William  Scott. The property then subsequently was owned by his son, Elijah until  1841 when Samuel and Charles Righter purchased it. In 1875, Philip  Wootton of Boonton purchased the Old Boonton Tract from the Righter  family for $10,000 and later took in James Holmes and William G. Lathrop as partners.

In  April of 1890, they sold the property to Messrs. Fitz Gibbon and Messer  of New York City for $15,000. The new owners built a paper mill on the  site which operated for more than a decade.

In  the late 1890’s the Old Boonton Tract, along with other properties in  the vicinity, was acquired by the Jersey City Water Supply Company for  purposes of a reservoir. Owner Fitz Gibbon, who had obtained full title  to the property, received $85,00 in compensation.

Preparations  for the reservoir included the building of a great dam less than a mile  downstream from Old Boonton and the clearing of the reservoir basin of  all buildings, structures, roads and trees.

Remnants  of foundations and stone boundary walls were left in the basin and new  bridge was built across the inlet to connection an extension of  Washington Street of Boonton to the displaced road to Morristown.

Between 1902-03, after the dam was completed, the waters began to rise, and barren site of Old Boonton faded from view.

John  L. Leal was employed as its sanitary adviser at the Jersey City Water  Supply Company (JCWSC). Included in Leal's responsibilities was the  removal of illegally constructed privies and other obvious sources of  sewage contamination from the watershed above Boonton Reservoir.  As a  physician who was trained in bacteriology, Leal knew that chlorine  killed bacteria.

On June 19, 1908, Leal hired George W. Fuller (to learn more, view George W. Fuller Profile) to construct a chlorination plant at Boonton Reservoir to disinfect the water for Jersey City as a representation of "other plans or devices". For more details, read Chlorination.

At  the time, Fuller was, perhaps, the most respected sanitary engineer in  the U.S.. In 99 days, Fuller designed the chlorination plant and  supervised its construction. Dilute solutions of chloride of lime were  accurately fed by gravity to the water being treated. Fuller based his  design on the successful aluminum sulfate feed system that he had built at the Little Falls Water Treatment Plant in 1902. View the Aluminum Sulfate Profile.

The  chlorination plant at Boonton Reservoir treating an average of 40  million gallons per day went on-line on September 26, 1908. Since then,  water from this source has been continuously chlorinated, making it the  water supply with the longest history of disinfection

Edwin Scribner founded the Loanda Hard Rubber Company in Boonton in 1891. His son-in-law Richard Seabury switched the company’s focus in 1906 to the production of Bakelite products, an early synthetic resin that was a forerunner of plastic.

Melamine, a thermoset plastic material, was developed prior to World War II and was used in many factory applications. It was available for low prices during and after the war, which led to its use in a variety of consumer products, including dinnerware. American Cyanamid, a major producer of melamine, branded its powdered product “Melmac” for sale to plastics molders.

By this time, Seabury’s business had become Boonton Molding and began producing its own version of Melmac dinnerware in the 1940s, calling it “Boontonware.” In the 1950s and ’60s, Boontonware was being sold worldwide, with the colorful kitchenware guaranteed for one year against breakage.

Today, Boontonware is one of a number of Melmac products prized by collectors.

From that simple and early beginning, one of the world’s great industries had developed and made the name of Boonton famous.