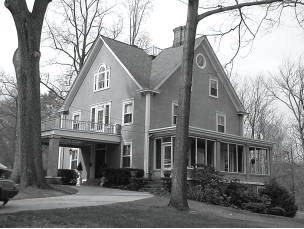 The George W. Esten House  on Rockaway Street in Boonton. This large three story home was built  around 1875 for Mr. Esten, Superintendent of the Boonton Iron Works. It is believed Esten used the six-story vantage point on the widow’s walk to view the ironworks across the Rockaway River.
Source: Gem_2004

The last Indians seen in Boonton paddled his own canoe through here on the Morris  Canal in the Summer of 1833. Mr. Lyon recalled that the Indian with his  bow and arrow, knocked the pennies out of a split stick, in which they  were placed edgewise, at a distance of twenty yards, about as fast as  half-a-dozen boys could pick them up. (Taken from the writings of Isaac  S. Lyon of 1873)

From the Harper’s Magazine - "The village of Boonton is beautifully  situated - so far as charming prospect is concerned - upon the almost  precipitous - face of a bluff, which forms one of the sides of a deep  ravine through which the Rockaway River empties its waters into the  plain below" 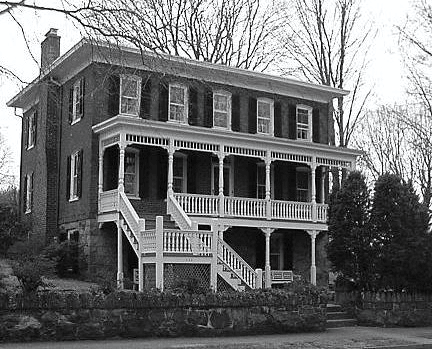 Known as the John Carson House; this house, located on Church Street, was built about 1867. John Carson was a Scottish mason and built the house on land purchased from Fuller and Lord, the owners of the local iron works.

He constructed a number of other structures in Boonton, including the landmark stone Arch Bridge over the Rockaway River, still in use today by hikers in Boonton’s Grace Lord Park.

Carson died tragically of injuries incurred while working on the bridge only a year after he built this handsome house.

Surrounded by a granite and pudding stone wall, the house is a good example of the Italianate “cube” style.

The  decorative double front porch is Queen Anne in style and probably not  original to the house. The dwelling exhibits a plain cornice, arched  lintels and a large overhanging hipped roof.
Source: Gem_2005_V1

One of  the first bakeries was on Church Street owned and operated by Mrs.  James Casey. It was a brick building used as a home along with the  bakery. Mrs. Casey sold hot rolls, corn cakes, confectionaries, jelly  and canned fruits. By 1878 Andrew D.Speer had taken over. In February  1882, Mr. Speer’s sleigh broke down in Rockaway Valley in a bad storm  and as a result fingers on both hands had to be amputated. Davenport and Knott took over the bakery.