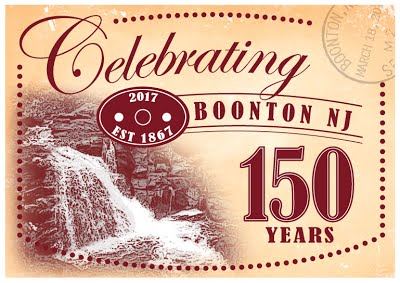 Ladies and Gentlemen, good afternoon.  As Boonton’s Mayor, it’s my honor to welcome you all today to the marking of Boonton’s 150th Birthday which  begins a yearlong celebration of our town as it marks a century and half in existence.

We are joined today by many past Boonton alderman and Mayors as well as elected county, state and federal officials.  They include:

On behalf of all the residents of Boonton, our most heartfelt thanks for joining us on this special occasion.

On this very day in 1867, Boonton, NJ officially became its own municipality.  And while it has had many names including Boone Town, Old Booneton, and Booneton Falls, what has remained the same is the town’s amazing history, it's natural beauty and the giving spirit of those who live and work within its 2+ square mile borders.

Since its beginnings, the town developed on the backs of hardworking citizens that gave of themselves to the industry they worked for and the community they loved.  In 1909, the wife of the rector of St. John’s church on Cornelia Street described Boonton as being located in the hill country of northern New Jersey, where iron ore having been found brought industry into the farmlands and the town’s life centered on the iron works located in the valley between the gushing Rockaway River and the Morris Canal.  She writes, it was a picturesque town, especially at night when the great iron furnaces threw their blazing sparks into the dark night sky.

And a picturesque town it remains today. Grace Lord Park for example, with its fountain, falls and landmark gazebo, is home to concerts, walking trails and vistas of the Rockaway River that offer a glimpse of what the town looked like over a century ago.

And of our history and people?  Boonton was a critical stop on the Underground Railroad and home of the world famous Boontonware. Trolley cars, vaudeville theatres and hotels thrived on our Main Street at the turn of the 20th century.

Boonton was the first in the area to create a free school paid for through tax dollars, John Hill (for whom one of our Schools was named) served on Boonton’s town council and was elected to the US Congress where he introduced the modern-day post card, Andrew Jackson Davis launched the nation’s spiritualist movement from a house that once stood where the Elk’s lodge stands, and William Green Jr. (for whom William street and Green streets are named) who lived in that same home was part of the drafting of the first anti-slavery document in America.

Past residents, worked with the likes of Thomas Edison and President Abraham Lincoln.  Our 2016 citizen of the year,  99 years young,  Steve Bolcar,  is a great example of service to others and we boast multiple  purple heart winners, our past Mayor Anthony Bucco has gone on to years of valued service as a state senator and his son to our state’s assembly. Boonton was the first town in Morris County to have an African American chief of police, and even today, our very own Jim Gannon now serves as the county’s newly elected sheriff.

As the Morris County Tourism board writes, our Main Street is now the home of high-tech companies, art galleries and a wide range of restaurants and shops that show how the town has evolved and diversified both in its industry and population.

So from 1867 through today, Boonton, NJ has produced and continues to be the home of some of the most amazing people this country has seen. The kinds of people that are woven into the very fabric that has made this nation great for so long. . . .people like Father Daniel of Our Lady of Mt. Carmel Church, Father Tim of St. John’s Church, our police who are also celebrating 150 years of service, our all-volunteer fire department (with 125 years of committed service) and our ambulance squad represented here today. . .

and my fellow Boontonites, people like you …that walk out your doors each day to make a difference, to belong to something bigger than yourselves and that continue to make Boonton, NJ a small town with a big heart.

And so from all of us to our beloved small town on a hill, Happy Birthday and may God continue to bless Boonton USA.

Before we conclude the ceremony today and I invite everyone back to the historical society for refreshments and followed by an historical film being shown at the Darresss Theater at 2:30pm.

A special thanks to our department of public works for the hanging of our commemorative banner and clearing all the snow for us.

As well, a special thanks to the volunteers that have worked to make all of this possible including Dianne Gorman who designed the logo postcard and the amazing banners that adorn our Main Street and beyond, Debi Hopkins, whose great grandfather Charles Ferns Hopkins is himself a storied hero of Boonton and the regular 150th committee members including Steve Bossen, Kelly Miniter, Jennifer Gallo, The Boonton Elks' Carol Morokoff, Stephanie Monrad, Jennifer Shollenberger, Tina Mezzina Harold Johnson and Dee Kromka.